Her Story is a bookclub that meets at Hub City Bookshop on the first (and sometimes second!) Wednesday of each month to discuss books about women, by women. Meet us on Zoom for our virtual bookclub on April 8th to discuss Isabel Allende's A LONG PETAL OF THE SEA. Bookclub will begin at 6 p.m. Enjoy reading!

A Long Petal of the Sea by Isabelle Allende

“One of the most richly imagined portrayals of the Spanish Civil War to date, and one of the strongest and most affecting works in [Isabel Allende’s] long career.”—The New York Times Book Review

In the late 1930s, civil war grips Spain. When General Franco and his Fascists succeed in overthrowing the government, hundreds of thousands are forced to flee in a treacherous journey over the mountains to the French border. Among them is Roser, a pregnant young widow, who finds her life intertwined with that of Victor Dalmau, an army doctor and the brother of her deceased love. In order to survive, the two must unite in a marriage neither of them desires.

Together with two thousand other refugees, they embark on the SS Winnipeg, a ship chartered by the poet Pablo Neruda, to Chile: “the long petal of sea and wine and snow.” As unlikely partners, they embrace exile as the rest of Europe erupts in world war. Starting over on a new continent, their trials are just beginning, and over the course of their lives, they will face trial after trial. But they will also find joy as they patiently await the day when they will be exiles no more. Through it all, their hope of returning to Spain keeps them going. Destined to witness the battle between freedom and repression as it plays out across the world, Roser and Victor will find that home might have been closer than they thought all along.

A masterful work of historical fiction about hope, exile, and belonging, A Long Petal of the Sea shows Isabel Allende at the height of her powers.

“A tale that is seductively intimate and strategically charming . . . a virtuoso of lucidly well-told, utterly enrapturing fiction . . . Allende deftly addresses war, displacement, violence, and loss in a novel of survival and love under siege.”—Booklist (starred review)

“A Long Petal of the Sea is a rich and transportive novel, epic in scope, about finding love and finding home.”—PopSugar

“An immersive read about love and survival.”—Real Simple

“Isabel Allende has time and again proven herself a master of magical realism. Her latest novel . . . serves as a paean to human love and endurance.”—Elle

“Allende fans have been waiting with bated breath for her latest novel, and A Long Petal of the Sea doesn’t disappoint.”—Marie Claire

“The wondrous Isabel Allende is back, doing what she does best.”—Read It Forward 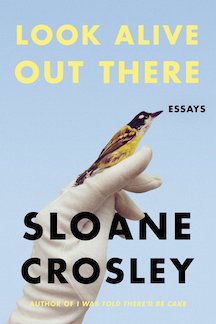 Look Alive Out There by Sloane Crosley