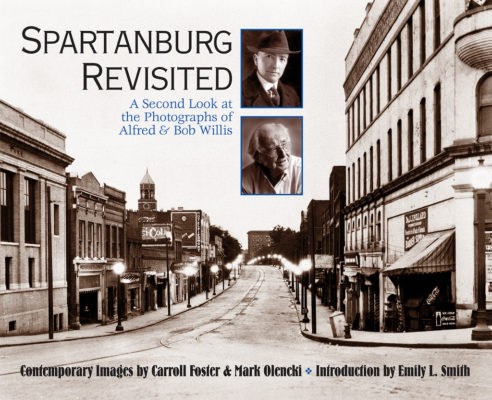 Spartanburg Revisited: A Second Look at the Photographs of Alfred and Bob Willis tells the story of these charismatic photographers and commemorates the Collection they devoted their lives to creating. Read More

The father-son photography team of Alfred Tennyson and Robert H. “Bob” Willis documented over eighty years of Spartanburg history. This book revisits their work with new photographs by Carroll Foster and Mark Olencki. For the first time, vintage Willis photographs appear alongside contemporary versions of existing street corners and buildings. The “then and now” presentation reveals a Southern city in transition and makes a case for preservation of the treasures of our past.

While Spartanburg Revisited is a tribute to the city that fills these pages, it is also an homage to the two men who documented her through the years. As Emily L. Smith writes in her introduction, “Around Spartanburg the mere mention of the names Alfred and Bob Willis incited anecdotes not only about the father-son school picture takers, but also of the laughter and magic they created around them everywhere they went. People remembered their cars, their dogs, their yards, their jokes, and their trademark idiosyncrasies…The Willises’ legacy is greater than any compilation of their photographs.”

Here are the Willises and their photographs, brought out of storage and down from the library’s lobby walls into your living rooms and hands.

A native of York, South Carolina, Emily L. Smith holds a bachelor's degree in English from Davidson College and a Master of Fine Arts in creative writing from the University of North Carolina Wilmington. Her place-based writing has appeared in the journals Columbia Poetry Review, Front Porch, The Journal, Smartish Pace, and Tar River Poetry, among others. A former Byington Fellow, she currently directs The Publishing Laboratory at UNCW, where she also teaches. In 2006-2007 she lived and wrote in Spartanburg as the Hub City Writers Project's inaugural Writer-in-Residence.