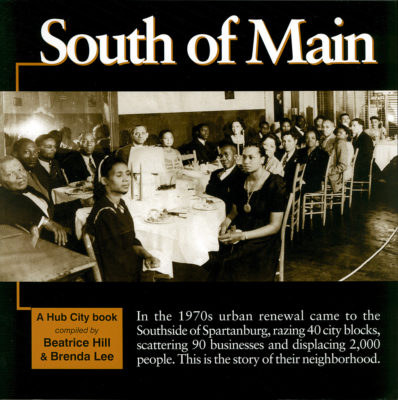 Between 1970 and 1978 urban renewal razed 40 blocks of their neighborhood, scattered 90 businesses and displaced an estimated 2,000 people. Through oral histories, photographs, and maps, their memories survive in this rich collection of stories called South of Main. Read More

More than 1,400 neighborhoods in the United States, most of them African-American, were leveled in the name of urban renewal during the mid-twentieth century. South of Main recreates the culture and history of just one of those, the Southside of Spartanburg, South Carolina, founded in the 1860s by a group of ex-slaves who lived together at the end of a dusty road called Liberty Street.

This poignant and painful history examines the experiences of the people who called the Southside home and whose lives were affected by the bulldozers of urban renewal. Their story is an American story, a complex chronicle of a people powerless against the whims of progress. 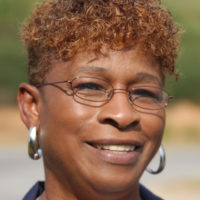 Born in Tobe Hartwell Apartments, Bea Hill has had a lifelong interest in the history of her neighborhood. She attended school at Carrier Street Elementary, Highland Elementary, and Mary H. Wright, and graduated from Carver High School. In 1979 she coordinated the first Tobe Hartwell neighborhood reunion, which drew 300 people to her backyard.