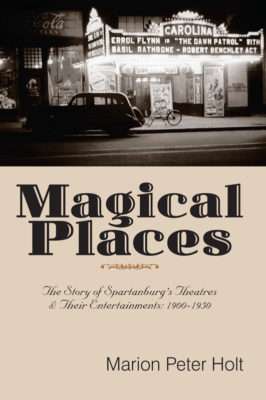 Magical Places: The Story of Spartanburg's Theatres and Their Entertainments, 1900-1950 is an illustrated history of a departed era, complete with vintage photographs, advertisements, and other theatre memorabilia. Read More

From the touring shows that played the Spartanburg Opera House and Harris Theatre in the early decades of the 20th century to the marquee-lit motion picture palaces of the World War II era, author Marion Peter Holt tells a moving story of a Southern community's romance with traveling performers and Hollywood actors and actresses.

The 116-page paperback book includes in-depth information about the architecture of these theatres and the roster of impressive performances that took place at the Montgomery Theatre, the State, the Grand, the Strand, and many others. Memorable theatre impresarios such as Lawrence Lester, Max Greenewald and Robert Talbert take center stage in this engaging journey through fifty years of audience ecstasy.

"Marion Peter Holt's Magical Places is a lively, entertaining cultural history. This chronicle is of local interest, with examples specific to Spartanburg, but also deserves to find a wide audience as it surveys entertainment trends-touring plays, silent films paired with vaudeville acts, feature-length talkies, the eventual displacement of the other forms by television, and abandonment of older movie houses for generic multiplexes-common throughout the region and the entire country." —Dr. J.K. Curry, associate professor of theatre at Wake Forest University. 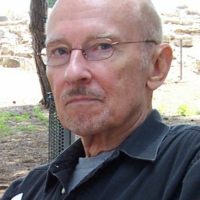 Marion Peter Holt is a writer, translator, and professor emeritus of Theatre at the Graduate Center of the City University of New York. He grew up in Spartanburg, attended Wofford College, and began his teaching career at Converse College. His translations of contemporary Spanish and Catalan plays have been staged in New York and London, in Australia, and at regional and university theatres throughout the United States.