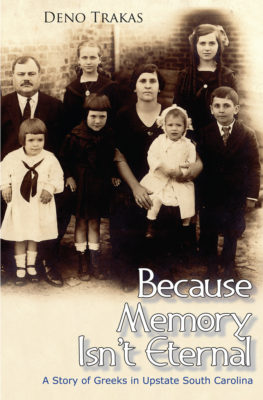 Deno Trakas tells the story of the Greek-Americans of South Carolina, including four generations of his own family lore. Read More

In 1895 Nicholas Trakas left his village in southern Greece, boarded a steamship for America, and made his way to another southern village, Spartanburg, where he became the South Carolina city’s first Greek resident. He opened the Elite—one of the finest candy kitchens in the South—built a house on a lot he purchased for $44 and a pet parrot that could cuss in Greek, and began a wave of immigration from his home country into the burgeoning Upstate area.

A century later his grandson, Deno Trakas explores the peculiarly Southern version of the Greek-American story in Because Memory Isn’t Eternal: A Story of Greeks in Upstate South Carolina. By introducing us to four generations of Trakas family members, their remarkable friends and their hard-working business partners, he tells a greater story and reflects on how these complex, larger-than-life characters have preserved the best of Greek culture down South. This intimate and often humorous memoir brings us stories of Greek-American marriages, food, language, restaurants, and religion, including the day two Trakas boys accidently burned down the family’s church.

At Greek funerals there is the constantly repeated refrain: Aionia i mnimi—“May his (or her) memory be eternal.” More often, Trakas tell us, memory is “painfully, annoyingly short.” His loving, illustrated tribute to Greek-Americans assures that these stories and this history will not be forgotten.

"Because Memory Isn't Eternal is a colorful chronicle of the Greek-American community in upstate South Carolina, but you don't have to be Greek to enjoy the stories of what a group of stalwart immigrants from two villages near Delphi endured and accomplished in their new-found land. An inspiring read, it adds another volume to the growing literature on the Greek-American experience and testifies forcefully to what Greek-Americans have contributed to the United States over the past 100 years." —Nicholas Gage, author of Eleni and A Place for Us

"Because Memory Isn't Eternal captures the trials, tribulations, and successes of Greeks in the Upstate of South Carolina. Deno Trakas offers a unique perspective and a genuine taste of Greece in the Upstate, while providing us also with important historical background and a look at the complex, funny, and tragic lives of generations of Greek-Americans." —Nick Theodore, former South Carolina Lieutenant Governor

"Blending equal parts historian, sociologist, poet, memoirist—and even cookbook author—Deno Trakas offers a poignant glimpse into the immigrant experience in America. Like the recipes sprinkled throughout the memoir, the specifics of the narrative are Greek, but the themes couldn’t be more universal or timely." —Dean Kostos, editor of Pomegranate Seeds: An Anthology of Greek-American Poetry 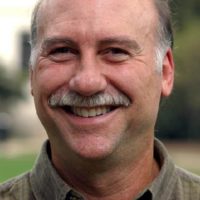 Deno Trakas is the Hoy Professor of American Literature and Chair of the English Department at Wofford College in Spartanburg, South Carolina, where he lives with his wife, Kathy. Holocene Press has published two chapbooks of his poetry, The Shuffle of Wings and human & puny, and he’s published fiction and poetry in anthologies and magazines such as The Cimarron Review, The Denver Quarterly, Oxford American, and Pomegranate Seeds: An Anthology of Greek American Poetry. His work has appeared in several Hub City publications, most recently the award-winning Expecting Goodness & Other Stories.