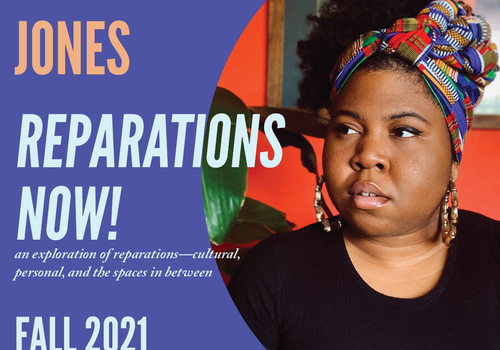 Hub City Press is pleased to announce plans for publication of Ashley M. Jones's third book of poetry. Titled Reparations Now!, the poems are investigations of reparations both personal and cultural, an exploration of those the USA might owe to oppressed and colonized people, but also small reparations--little things stolen and worth reclaiming.

Hub City Press published Jones's poetry debut, Magic City Gospel, in January 2017. Since then, Jones was awarded the Lena-Miles Wever Todd Prize for Poetry for her book dark / / thing, selected by Marcus Wicker. Reparations Now! will publish in the fall of 2021.

Ashley M. Jones holds an MFA in Poetry from Florida International University, and she is the author of Magic City Gospel and dark / / thing. Her poetry has earned several awards, including the Rona Jaffe Foundation Writers Award, the Silver Medal in the Independent Publishers Book Awards, the Lena-Miles Wever Todd Prize for Poetry, a Literature Fellowship from the Alabama State Council on the Arts, the Lucille Clifton Poetry Prize, and the Lucille Clifton Legacy Award. Her poems and essays appear in or are forthcoming at CNN, The Oxford American, Origins Journal, The Quarry by Split This Rock, Obsidian, and many others. She teaches at the Alabama School of Fine Arts, she co-directs PEN Birmingham, and she is the founding director of the Magic City Poetry Festival.