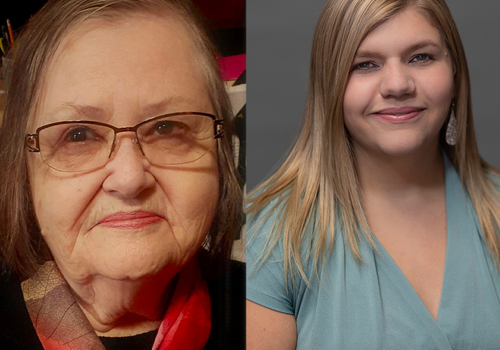 We are pleased to announce that the annual Hub City/Emrys Creative Writing Prize has been awarded to June Freeman Baswell of Taylors, SC in fiction for her story "Scheherazade" and Macy Petty of Greenville, SC in poetry for her poem "The Green Veil". Sponsored by the Hub City Writers Project and the Emrys Foundation, the contest is open to adults in Greenville and Spartanburg Counties in South Carolina, and Polk County in North Carolina. Runners up were Lara Rudman in fiction and Koen Paszkiewicz in poetry.

June Freeman Baswell lives and writes in upstate South Carolina. She is a member of The South Carolina Writers Association and the Greenville I chapter, a writing group.  She is also a contributing member of Thema, a literary magazine published in Louisiana and has had three short stories published in its pages.  In 2018, she received the Carrie McCray award of second place in short fiction and third place in poetry and publication in The Pettigru Review.  A poem of hers was published in the 2021 edition of Catfish Stew, an anthology of work by members of the SCWA. She is currently revising a metafictional fantasy novel inspired in part by Flann O’Brien’s At Swim-Two-Birds.

Macy Petty is a rising senior at Furman University, where she is double majoring in Vocal Performance and English. Originally from Jonesville, South Carolina, she has worked as a writer for Union County News and for Furman’s student newspaper, The Paladin. Her poetry and short fiction have been published in Furman’s student literary magazine, The Echo. In addition to writing, Macy enjoys performing in the university’s voice program. Outside of school, she loves to shop and have movie marathons with her family.

The Hub City/Emrys Writing Contest is open annually. The winners receive a full scholarship to the annual Writing in Place Conference hosted by the Hub City Writers Project and held at Wofford College in Spartanburg, SC. The runners-up receive $50 scholarships to the conference.

The Hub City Writers Project is a non-profit organization in Spartanburg dedicated to cultivating readers and nurturing writers through its independent small press, community bookstore, and diverse literary programming that serves the community and beyond. The Emrys Foundation, based in Greenville, nurtures creativity among emerging and established writers.

Fiction entries where judged this year by Maris Lawyer. Of the winner, she said, "I was struck by the visceral, distinctive language in this short story and the relational detail the author achieves between these two characters in such a short space. A great example of the sort of memorability a short story can achieve." Maris Lawyer is a born and bred native of the South Carolina Upstate. She graduated with a degree in creative writing from Anderson University and has since gone to work as an HR generalist for an environmental consulting firm in Greenville, SC. Maris lives in Easley, SC with her husband, their son, and two cats, Merlin and Luna.

Poetry entries where judged this year by Patrick Whitfill. "With 'Green Veil,'" he said, "I felt called back to Caedmon, to the Bucolics of Maurice Manning, the musings of Frank Stafford. Poetry written into the natural landscape with the diction and vernacular of the person who would actually visit that spot, who would consider mortality when facing a horizon, reminds me of what first drew me to the art form: legitimate generosity of spirit. I felt compelled to finish the poem, both for its voice and its meditation." Patrick Whitfill has poems and reviews appearing in the Threepenny Review, Colorado Review, Subtropics, 32 Poems, among other journals. Currently, he teaches at Wofford College in Spartanburg, SC, and he co-curates The New Southern Voices Reading Series.