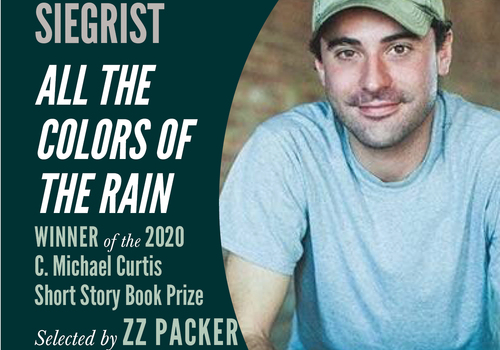 Hub City Press is pleased to announce that Andrew Siegrist of Nashville, Tennessee has won the 2020 C. Michael Curtis Short Story Book Prize for his collection, All the Colors of Rain. The Curtis Prize is awarded to an emerging Southern writer, and Siegrist will receive $10,000 and publication by Hub City Press of his short story collection in 2021. The previous winners of the prize are Emily W. Pease for Let Me Out Here in 2018 and Ashleigh Bryant Phillips for Sleepovers in 2019. Winners have been featured in The New Yorker, Poets & Writers, The Paris Review, and the Kenyon Review, among other outlets.

Andrew Siegrist is a graduate of the Creative Workshop at the University of New Orleans. His work has appeared in The Baltimore Review, Arts & Letters, The Greensboro Review, Pembroke Magazine, Fiction Southeast, Bat City Review, and elsewhere. He lives on the Cumberland River outside of Nashville, Tennessee.

About Siegrist’s collection, ZZ Packer said, “Reading All the Colors of Rain is like entering a dream journal—every sense is heightened and stretched, every memory expanded and reassembled in the hopes of deciphering the past or surviving the present. This collection reminds me of the very best writers of contemporary rural stories: Jesmyn Ward, Bobbie Ann Mason, and Wendell Berry. A keen eye for the truths of the human condition—as well as a mastery of tone, detail, and imagery—make this writer one to watch.”

Siegrist’s collection was chosen by judge ZZ Packer, who is the author of Drinking Coffee Elsewhere and has been frequently published in such journals as The New Yorker and Granta. She is at work on a novel. She has been awarded a Guggenheim Fellowship, the American Academy in Berlin Prize, and a Radcliffe Institute Fellowship. She has taught at many institutions including Princeton, where she was a Hodder Fellow; the Michener Center at the University of Texas; Vassar College; and as a Jones Lecturer at Stanford. She received her education at Yale, Johns Hopkins, the University of Iowa, and Stanford as a Stegner Fellow.

The finalists for the 2020 prize were Amber Wheeler Bacon for her collection We Were Vessels, Scott Gloden for The Birds of Basra, Bill Glose for All the Ruined Men, and Kirk Wilson for Smash and Grab: Love Stories.

The prize is named in honor of C. Michael Curtis, who has served as an editor of The Atlantic since 1963 and as fiction editor since 1982. Curtis has discovered or edited some of the finest short story writers of the modern era, including Tobias Wolff, Joyce Carol Oates, John Updike, and Anne Beattie. Curtis moved to Spartanburg, South Carolina in 2006 and has taught as a professor at both Wofford and Converse Colleges, in addition to serving on the editorial board of Hub City Press.

The prize will reopen for submissions in September 2021.