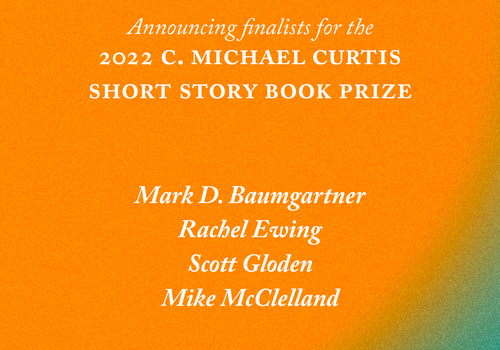 Hub City Press is pleased to announce the five finalists for the 2022 C. Michael Curtis Short Story Book Prize, which is awarded to an emerging Southern writer. The winner will receive $5,000 and publication by Hub City Press of their short story collection.

Four finalists have been selected after two rounds of reading, and the winner will be selected by judge Kevin Wilson. He is the author of two collections, Tunneling to the Center of the Earth, which received an Alex Award from the American Library Association and the Shirley Jackson Award, and Baby You’re Gonna Be Mine, and three novels, The Family Fang, Perfect Little World, and Nothing to See Here. His fiction has appeared in Ploughshares, Tin House, One Story, A Public Space, and elsewhere, and has appeared in four volumes of the New Stories from the South: The Year’s Best anthology as well as The PEN/O. Henry Prize Stories 2012. He has received fellowships from the MacDowell Colony, Yaddo, Rivendell, and the KHN Center for the Arts. He lives in Sewanee, Tennessee, with his wife, the poet Leigh Anne Couch, and his sons, Griff and Patch, where he is an Associate Professor in the English Department at Sewanee: The University of the South.

The finalists are Mark D. Baumgartner for his collection Last of the Icemen, Rachel Ewing for Like Disaster, Scott Gloden for The Birds of Basra, and Mike McClelland for What Used to Be Caracas.

Mark D. Baumgartner lives in the mountains of East Tennessee with his wife and two kids. His work has been published in several literary journals, including The Southern Review, Confrontation, Fugue, Best of Ohio Anthology, Bellingham Review, Phoebe, and Tampa Review, among others. His story, “The Great Siwash Shoe War,” won the 2014 Fugue prize in short fiction, judged by novelist Kevin Canty. He has worked in various editorial capacities at Witness, Mid-American Review, and River Styx, and is currently editor-in-chief of Aethlon: The Journal of Sport Literature. He teaches fiction, screenwriting and literature at East Tennessee State University.

Rachel Ewing is a fiction writer from Mississippi. She is currently pursuing a PhD in Creative Writing at the University of Louisiana at Lafayette.

Like Sharon Stone and the zipper, Mike McClelland is originally from Meadville, Pennsylvania. He has lived on five different continents but now resides in Georgia with his husband, two sons, and a menagerie of rescue dogs. He is the author of the short fiction collection Gay Zoo Day and his creative work has appeared or is forthcoming in The New York Times, WIRED, Boston Review, Vox, The Baffler, and a number of literary magazines and anthologies. He is a graduate of Allegheny College, The London School of Economics, the MFA program at Georgia College, and University of Georgia's Creative Writing PhD program. Find him online at magicmikewrites.com.

The prize is named in honor of C. Michael Curtis, who has served as an editor of The Atlantic since 1963 and as fiction editor since 1982. Curtis has discovered or edited some of the finest short story writers of the modern era, including Tobias Wolff, Joyce Carol Oates, John Updike, and Anne Beattie. He has edited several acclaimed anthologies, including Contemporary New England Stories, God: Stories, and Faith: Stories. Curtis moved to Spartanburg, S.C. in 2006 and has taught as a professor at both Wofford and Converse Colleges in addition to serving on the editorial board of Hub City Press.

The winner and runner up of the C. Michael Curtis Short Story Book Prize will be announced across all social media platforms in the next week.