Susan Messiner's The Last Year of the War is the story of a little known aspect of World War II—the internment of thousands of German immigrants and their American-born children, many of whom, were repatriated in prisoner exchanges to wartorn Germany. Join us for a conversation with the author via Zoom on Thursday, April 23rd!

RSVP for the event link and passcode!

An American girl’s life changes forever when her German immigrant parents are interned in a WW2 Texas internment camp. Elise Sontag is a typical Iowa fourteen-year-old but then her German immigrant father, a legal U.S. resident for nearly two decades, is suddenly arrested on suspicion of being a Nazi sympathizer. The family is sent to an internment camp in Texas, where, behind the armed guards and barbed wire, Elise feels stripped of her very identity.

At the camp she meets fellow internee Mariko Inoue, a Japanese-American teenager from Los Angeles, and their unlikely friendship, even after they are both repatriated, challenges Elise to hold on to the belief the life she knew before the war will again be hers. Here is a little-known WW2 story with great resonance for our own times which speaks to the notion of who we are when who we’ve always been is called into question. 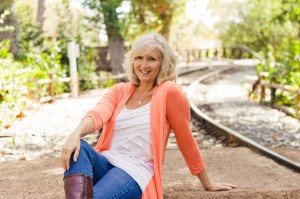 Susan Meissner is a USA Today bestselling author of historical fiction with more than half a million books in print in fifteenlanguages. She is an author, speaker and writing workshop leader with a background in community journalism. Her novels include The Last Year of the War, As Bright as Heaven, Secrets of Charmed Life, and A Fall of Marigolds. A California native, she attended Point Loma Nazarene University and is also a writing workshop volunteer for Words Alive, a San Diego non-profit dedicated to helping at-risk youth foster a love for reading and writing.