In Conversation with Caroline B. Cooney and Leah Weiss | The Grandmother Plot

Join us for a virtual conversation with international bestselling author, Caroline B. Cooney, and award-winning Southern author, Leah Weiss, on July 6th at 7PM! We will be celebrating the release of Cooney's newest novel, The Grandmother Plot, which publishes the day of the event! Keep an eye out for Weiss's new novel, All the Little Hopes, releasing at the end of July! Sign up to attend for free, or purchase a ticket to receive a signed copy of The Grandmother Plot shipped to your home.

by Caroline B. Cooney

An unforgettable new mystery from Caroline B. Cooney, international bestselling author of The Face on the Milk Carton

"Caroline B. Cooney is a master of taking a small, common moment―seeing a face on a milk carton, posting a harmless photo―and turning that moment into a thrilling story."―Jeff Abbott, New York Times bestselling author of Never Ask Me

Death isn't unexpected in a nursing home. But murder is.

Freddy leads a life of little responsibility. His mother is dead, his sisters are far-flung across the globe, and he can't quite work up enough motivation to find himself a girlfriend. Freddy has been forced to place his beloved grandmother, now deep in dementia, in a nursing home. Freddy visits her often, cherishing and also hating the time he spends with the grandmother he always adored, now a ghost of her former self.

When a fragile old woman already close to death is murdered in that nursing home, Freddy panics. His sources of income are iffy, as are his friends. He has to keep his grandmother safe, keep himself anonymous, and keep the police out of his life―or the complications could become deadly.

From international bestselling author of The Face on the Milk Carton Caroline B. Cooney, The Grandmother Plot is the story of a young man who can't seem to straighten out his life, his beloved grandmother, who can't seem to remembers hers, and the shadowy threat that hangs over them both.

Caroline B. Cooney is the author of more than 90 suspense, mystery, and romance novels for teenagers, which have sold over 15,000,000 copies and are published in several languages. The Face on the Milk Carton has sold over 3,000,000 copies and was made into a television movie. Her books have won many state library awards and are on many booklists, such as the New York Public Library’s annual teen picks. Caroline grew up in Old Greenwich, Connecticut, and spent most of her life on the shoreline of that state but is now in South Carolina near her family. She has three children and four grandchildren. She was a church organist for many years, accompanied the choirs at her children’s schools, and now plays keyboard for musicals. Janie Face to Face, the fifth book in the Janie series, which begins with The Face on the Milk Carton, came out in 2014. Other recent titles are Three Black Swans, They Never Came Back, and If the Witness Lied, The Lost Songs, and No Such Person. 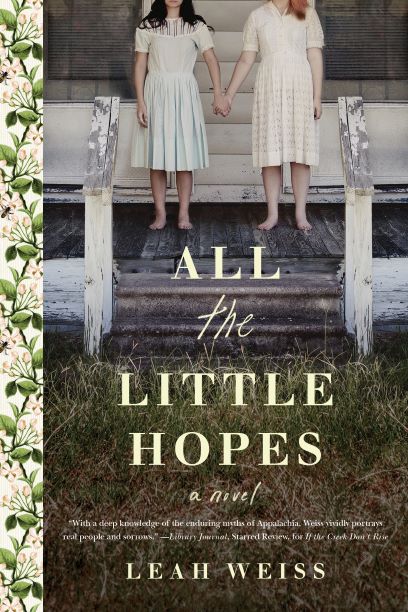 Leah Weiss is a Southern writer born in North Carolina and raised in the foothills of the Blue Ridge Mountains of Virginia. She graduated from Dunbarton College in Washington DC with a degree in music and received an education degree from Kent State University. She worked at many jobs before becoming the Executive Assistant to the Headmaster at Virginia Episcopal School. In June of 2015 she retired from that 24-year career and signed with a New York agent. Her debut novel If the Creek Don't Rise was released in August 2017 and has sold over 100,000 copies. It was selected as a Library Reads and an Indie Next and was #5 on the national Indie Picks for winter 2017-2018. It was nominated for the Southern Book Prize and was a 2018 finalist for both the Library of Virginia’s Literary Fiction and People’s Choice Awards. Her second novel, All the Little Hopes, holds traces of her mama’s Carolina life and will be released in July 2021. Leah writes full time and enjoys meeting with book clubs and speaking about the rewards of becoming a bestselling author late in life. When she’s not writing, she loves to travel and hike with her husband Dave, a gentle man, a beekeeper and avid reader.