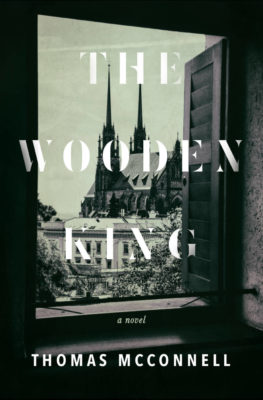 The Wooden King explores denial, desire, and family drama against the backdrop of Czechoslovakia during World War II. Read More

Czechoslovakia, 1939: Snow is falling over the city when the Nazis invade. Before the ice on the roads has a chance to melt, everything has changed for the country—and for Viktor Trn.

It isn’t obvious at first. The day-to-day realities of occupation take time to sink in. After losing his job as a history professor, Trn remains optimistic, preserving what little he can of his family’s dwindling freedom. In his family’s small apartment, the radio brings worsening news as Europe surrenders to Germany. Friends are arrested, men are hanged in the local school. Trn must protect his young son, but understands leaving their homeland could prove too dangerous.

Only when the air raids draw closer is Trn, a soft-spoken pacifist, pressured into making a choice: retreat to his decreasing sphere of familial safety, or join the resistance. Ultimately Trn finds himself caught between two titanic armies—the Nazis and the Soviets—and must decide how to save all that he loves.

In the spirit of Kristin Hannah's The Nightingale and Anthony Doerr's All the Light We Cannot See, The Wooden King explores denial, desire, and family drama against the lyrically rendered backdrop of World War II, deftly navigating “the simple difference between what we do and what we ought to do” in the face of rising totalitarianism.

Praise for The Wooden King

"McConnell shines in re-creating the stifled life of Czechs under the Occupation. Drama builds from start to finish with a conclusion that is particularly powerful." —Library Journal

"A relentless dirge and a fierce lament, The Wooden King challenges the 'good war' narrative in favor of a raw, personal interrogation that’s both visceral and ambivalent." —Booklist

"The Wooden King takes a bold stance. Its myopic personal focus emphasizes a certain futility to individual lives, as well as the callousness of history, especially in matters that smack of pro patria mori. As the close confines of Trn’s domestic sphere become the stage on which morality, patriotism, and military action play out, survival—not heroism—becomes everything and nothing." —Foreword Reviews

"At one point in this strikingly original and beautifully told novel of Czechoslovakia during the Second World War, the hero, Viktor Trn, an unassuming professor, is told, 'It is necessary that you teach history.' And that is precisely what Thomas McConnell, author of The Wooden King, has done in this moving, fast-paced tale of a man caught in in the world’s most tragic cataclysm. Read it and, like the history it lays bare, you won’t forget it." —Peter Golden, author of Wherever There Is Light

"The Wooden King is a profound and timely meditation on one man caught between allegiance to his family and to his country. Thomas McConnell vividly renders the dark ironies of history, but readers will encounter compassion, decency, and courage also. What an excellent debut!" —Ron Rash, author of The Risen

“In these troubled times, it is particularly fitting that a book like The Wooden King should come along. In the middle of World War II, and in the middle of the novel, a character says, 'What are we going to do about the horror we find ourselves in?' He goes on to say, 'We must act or not act.' With tyranny to the left of him and tyranny to the right and emotional turmoil at home, Viktor Trn, the protagonist, hardly knows what good if any he can do to survive, let alone prevail, but act he must. The Wooden King serves as a sober reminder of the perils of complacency and inaction in the face of injustice and oppression. Thomas McConnell has given us a powerful and important book." —Joseph Kertes, author of The Afterlife of Stars

"It is a beautiful burden to read this master writer's tale. The Wooden King is for the best of readers, for historians, and for those who want to change the future." —Emöke B’Racz, Store Owner and Founder, Malaprop's Bookstore 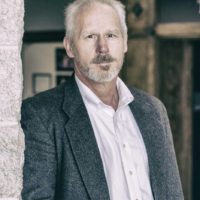 Thomas McConnell's work has appeared in the Connecticut Review, the Cortland Review and Shenandoah, among other publications. He has received the South Carolina Academy of Authors Fiction Fellowship, the Hackney National Literary Award for the Short Story, and his story collection A Picture Book of Hell and Other Landscapes was published by Texas Tech University Press. He teaches English at the University of South Carolina Upstate.