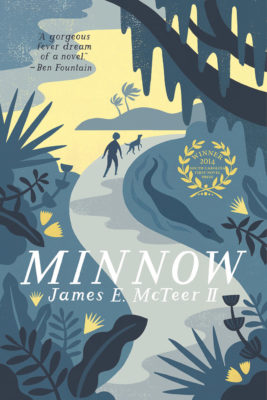 Minnow is an otherworldly story of a small boy who leaves his dying father’s bedside hunting a medicine for a mysterious illness. Sent by his mother to a local druggist in their seaside village, Minnow unexpectedly takes a dark and wondrous journey deep into the ancient Sea Islands, seeking the grave dust of a long-dead hoodoo man to buy him a cure. With only a half-feral dog at his side, Minnow’s odyssey is haunted at every turn by the agents of Sorry George, a witch doctor who once stirred up a fever that killed fifty-two men. Meanwhile, a tempest brews out at sea, threatening to bring untold devastation to the coastal way of life. Minnow is a remarkable debut novel that evokes the fiction of Karen Russell and Lauren Groff—a Lowcountry “Heart of Darkness” about the mysteries of childhood, the sacrifices we make to preserve our families, and the ghosts that linger in the Spanish moss of the South Carolina barrier islands.

"An evocative novel that brings to life an intensely realized portrait of the South Carolina Lowcountry and sends its appealing young hero on a journey full of the strangeness of childhood and the difficult choices that come with growing up." —Kirkus, starred review

"Readers will sink into this novel like sinking into South Carolina pluff mud, feeling the tension like oppressive humidity, and wondering what obstacle the protagonist will face next and what sacrifices he will endure for his family. A compellingly dark debut full of Southern mystery and lore." —Library Journal, starred review

"This is a memorable coming-of-age story brimming with unexpected encounters with man, beast, and nature, and some magic thrown in for good measure." —Publishers Weekly

"Minnow is an urgent novel, as stark and wild as the fairy tale deep in its bones. James McTeer writes with a white magic all his own; Minnow, the small brave boy he has summoned from a handful of grave-dust and a hurricane, will live with me for a long time to come." —Lauren Groff, author of Arcadia and The Monsters of Templeton

"I predict James McTeer's Minnow will become as estimable a part of the Lowcountry as the Hoodoo magic, ghosts and spirits, the haunted Gullah-geechies, Sweetgrass baskets, the Old Sheldon Church Ruins, and the art of Jonathan Greene. A fabulous tale." —Pat Conroy, author of The Death of Santini and The Water is Wide

"Minnow is a simple story of an uncomplicated hero, yet this richly imagined novel delivers scenes and themes that reverberate all the way back to Dante and Homer. On his unholy quest through the islands off South Carolina, young Minnow battles Mediterranean-sized monsters and hellish storms, and leaves a path that maps a mythical and mysterious Southern wilderness now lost forever. McTeer has created an unforgettable character and a strange American underworld, and with unabashed tenderness leaves his distinct mark on storytelling in the South." —Lydia Netzer, author of How to Tell Toledo from the Night Sky and Shine, Shine, Shine

“Minnow is a gorgeous fever-dream of a novel. McTeer's story of a young boy's quest achieves a narrative drive and depth that are rare in any novel, much less a debut effort. Minnow picked me up by the scruff of the neck and carried me along as powerfully as a novel by Pat Conroy or Toni Morrison.” —Ben Fountain, author of Billy Lynn’s Long Halftime Walk

"James McTeer's imagination is haunting and its way with reality disturbing and funny and joyous. I sped through the book, deep inside a genuine storyteller's spell. If a novel's chief magic is capturing the reader's mind, then this book is a spooky, brilliant debut." —Rebecca Lee, author of Bobcat and Other Stories 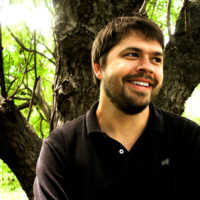 Born and raised in Beaufort, SC, McTeer is the winner of the 2014 South Carolina First Novel Prize. A school librarian in Columbia, SC, he is the grandson of the late J. E. McTeer, whose 37 years as High Sheriff of the Lowcountry (and local witch doctor) served as inspiration for Minnow.